The Art of Being Women 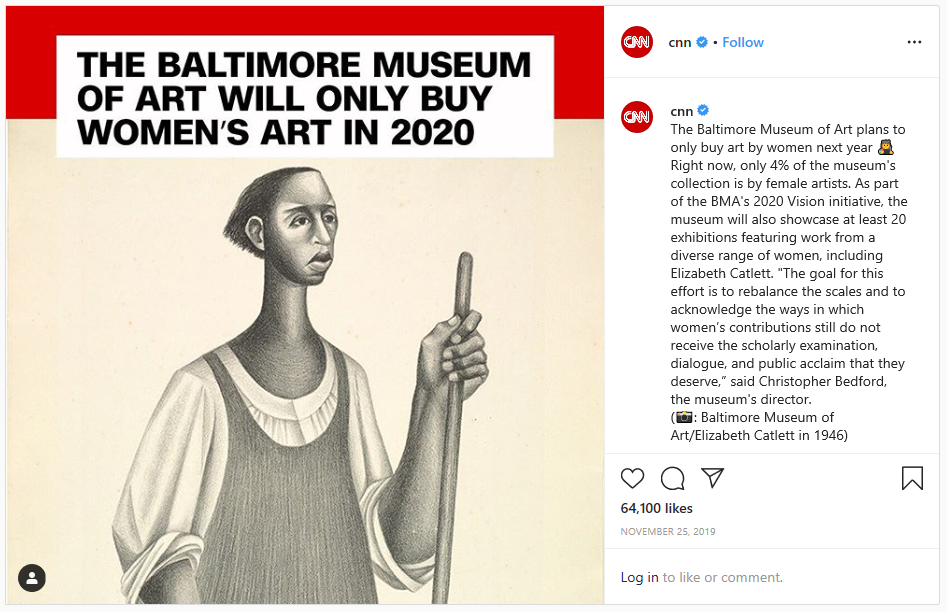 Did you hear about the Baltimore Museum of Art’s (BMA) plan to only buy women-produced art this year? Did you see how many people called that initiative sexist and racist? Is anyone else confused by that response?

For context’s sake, the BMA has an astounding collection of 95,000 objects from around the world. But only four percent of those objects are from female artists. If that’s not a tipped scale…

I’m not a museum curator, but I do know that intentionally seeking out and buying artwork made by women does not defeat the purpose of art, as some of the comments on the BMA’s announcement said it does. Quite the opposite, I believe it enhances the viewer’s experience of a gallery by offering more diverse viewpoints and narratives.

For me, looking at art is only half the fun. The other half comes from reading that little plaque next to the artwork about the artist’s journey to create it. I’d really appreciate reading some narratives that were from a female perspective for a change.

But let me be clear, my concern is about more than just women’s artwork. My real concern is the negative response society has when any women-focused initiative takes center stage. Whether an artist, a coding engineer, a politician, an astronaut, a mathematician or a fill-in-the-blank, women are a valuable asset to any field and bring so much to the table.

In the BMA’s statement about its 2020 initiative, they said they wanted to bring awareness to “the ways in which women’s contributions still do not receive the scholarly examination, dialogue, and public acclaim that they deserve.” This rings true across almost all career fields for women. Did you know that 78 percent of college students can’t name a famous woman in the tech field? But names like Elon Musk, Mark Zuckerberg or Steve Jobs come to mind easily.

It’s not because women artists and female tech geniuses don’t exist. They do: photographer Annie Leibovitz, director Kathryn Bigelow, artist Cindy Sherman, Facebook COO Sheryl Sandberg, computer scientist Manal Al-Sharif, and founder of Tech Ladies Allison Esposito. And those are just the ones still alive today. Why isn’t the conversation around these women and their work elevated to the same level as men’s contributions are?

I’m fully aware that in this broken world, when courageous voices crescendo to right a wrong there will always be a percentage of the population that responds with ignorance and hate. I’ve seen it. I’ve experienced it. But I’m not afraid to fight against it. Diversity and inclusion and gender equity has long surpassed the benchmark of “It’s the right thing to do.” Now, it’s the smart, logical thing to do, for businesses and society alike.

There’s an art to being a woman, and art is meant to be appreciated.